Facts About LTO and LTFS

Many media professionals face a number of challenges as a result of the phenomenal growth of file-based workflows and media. The need to reliably and cost-effectively store content has become critical for production and post production facilities transitioning to file-based pipelines.

Challenges of moving to a file-based pipeline

In addition to Linear Tape-Open (LTO) and Linear Tape File System (LTFS), here are the other existing storage options for the purpose of comparison:

Linear Tape Open (LTO) Ultrium is a high-capacity, single-reel tape storage solution developed and continually enhanced by Hewlett Packard Enterprise, IBM and Quantum and promoted by the LTO Program. It’s a powerful, scalable and adaptable tape format that helps address the growing demands of data protection. It’s also an open format, licensed by some of the most prominent names in the storage industry to ensure a broad range of compatible tape drives and cartridges.

LTFS: a file system for tape

Linear Tape File System (LTFS) is a development from the LTO consortium. It is designed to enable an open and more efficient way to access tape. Here is an example to put this file system into perspective: many years ago, hard disk-based systems standardized on file systems. These file systems include DOS, NTFS on Windows®, HFS on Mac® OSX, and XFS on Linux®. A file system defines a format for how content should be written to disk.

A file system also provides file system driver software that “mounts” the file system, and makes it available for applications to read and write files. These applications can be utility-based like Finder®, and Explorer that enable you to more easily copy, move, and rename files. Additionally, file systems allow any application to modify, and access files. File systems have enabled users to easily access files on hard drives, and across one or more workstations. 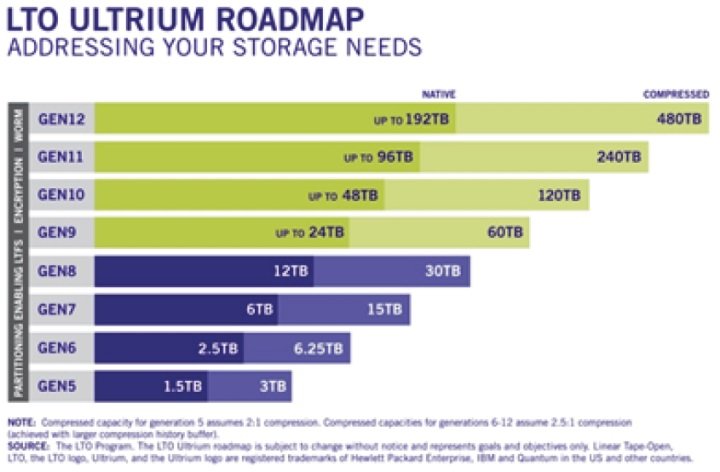 Until now, a standard for tape-based mediums did not exist. LTFS is the first standard that defines a file system for tape. Much like disk-based systems, LTFS defines an open format for how it writes content to tape. LTFS also consists of file system driver software that allows tapes to be “mounted” and be seen like any other mounted device.
More details can be found at: http://en.wikipedia.org/wiki/Linear_Tape_File_System

LTO and LTFS for long-term archiving

While a perfect storage medium may not exist, compared to the other available solutions, LTO with LTFS offers the most reliable, cost-effective alternative to solve the challenges of long-term data management for file-based workflows.

LTO and LTFS for media professionals

LTFS enables LTO to look more like disk, and this allows LTO to act not only as an archive medium to protect assets long-term, but also as a readily accessible nearline medium for storing raw and post assets. With growing amounts of file-based content, media professionals need a cost-effective, reliable and accessible storage medium. LTFS combined with LTO tape makes this possible.

LTO data tapes cost roughly 30 times less than the least expensive disk array system and about the same cost as removable hard drives. This allows you to significantly reduce the cost of storing large amounts of file-based media and keep this cost low as you scale.

Unlike a removable hard drive that is a complex device with heads and electronics, an LTO tape is a simple spool of tape with no moving parts. The read/write technology is hosted in the tape drive and not in the cartridge (like a hard drive). This means that an LTO tape has a far greater chance of surviving a disaster than a hard drive on a shelf. Further, LTO magnetic tape is designed to last on a shelf for 30 years (provided the appropriate temperate and humidity controls are maintained). As a result, media archived on LTO has a far greater chance of survival than a hard drive.

Prior to LTFS, a major drawback cited against LTO was the difficulty of access and closed data format on tape. As long as you write data to LTO using LTFS, your data remains open, similar to characteristics of a hard drive. LTFS has made LTO as open as any removable hard drive.

An LTO tape drive can read and write data at impressive speeds, (often exceeding the speed of a single hard drive). This means that an appropriately configured system and software can achieve the following archive and restore times for different media file types:

Archive and/or restore times for 1 hour of:

To ensure that media is protected, LTO employs verify-after-write technology: a read head that follows the write head, and verifies the data just written. This provides an automated check-summing operation for all data written to LTO. In addition, LTO provides twice the read/write performance of removable hard drives. Unlike a hard drive, where all data has to be read back to verify that data has been correctly written, LTO provides this capability during an archive job, saving an entire read and restore operation. This means that, on average, an archive and checksum operation with LTO will be four times faster than performing an archive and checksum to a removable hard drive.

Store multiple hours of content on a single tape

LTO has huge raw density capacities. This means that an LTO tape can hold multiple hours of traditional video tape footage. This is critical in reducing storage costs. The minimum number of hours of footage you can fit on a single LTO/LTFS tape is as follows, (assumption: 1.2 TB useable per LTO-5 tape; rest is factored in for LTFS headers and other metadata).

Historically, every generation of LTO could read back two previous generations of LTO tapes. An LTO-7 tape drive can read back LTO-6 and LTO-5 tapes. The tapes are specified for a 30-year shelf life, and as a result, you have to ensure that you also keep the tape drives around for 30 years.

This is often cited as a drawback of LTO technology compared to traditional film or video tape. However, it is considered good practice to migrate your media every five to ten years to truly guarantee the long-term health of your content. Instead of having to face years of untouched analog tape media, LTO technology ensures we check and refresh storage media every two generations.

Additionally, LTO enables you to take advantage of cost and performance efficiencies every generation. LTO doubles its capacity and drive speed every two to three years enabling you to store your media in half the space.

These are vastly different storage mediums: disk is random access and tape is not. Every application that writes to a file-system expects that a disk, (a random-access device), is behind the file-system. Without the knowledge that there is a tape behind a file-system, an application will experience a very poor I/O response. This is the reason why many end users deemed that LTFS is not ready for prime time. They pointed their favorite application directly, (such as Finder or Explorer), and as a result, simple list, read, and write simply hung.

It should be understood that while LTFS is a major breakthrough in that it will herald in a new set of applications for tape, it is not a drop-in replacement for disk.

Like tar, LTFS is an open standard and format for tapes. Therefore, if one vendor wrote to a tape using tar or LTFS, another user could independently extract the content. The most significant difference between LTFS and tar is that LTFS makes tape more accessible. While this has benefits for open access, this feature of LTFS alone does not offer a compelling advantage over tar.

The true benefits of LTFS come from its ability to empower application vendors to build better workflows, (powered by LTO), for the end user community. As better workflows are built on top of LTFS, end users are likely to prefer LTFS over tar-based pipelines.

As file-based acquisition becomes the norm, it is essential for media organizations to develop a long-term content archival and retrieval strategy. Today, LTO with LTFS is a cost-effective and reliable option to protect digital media assets. This proven technology will advance, the performance will accelerate, and it will continue to be a powerful storage solution for the film, video and broadcast industry for decades to come.

This website uses cookies so that we can provide you with the best user experience possible. Cookie information is stored in your browser and performs functions such as recognising you when you return to our website and helping our team to understand which sections of the website you find most interesting and useful.

Strictly Necessary Cookie should be enabled at all times so that we can save your preferences for cookie settings.

If you disable this cookie, we will not be able to save your preferences. This means that every time you visit this website you will need to enable or disable cookies again.